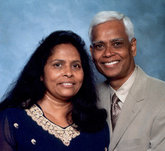 The history of Good News for India is the story of God using an ordinary couple in an extraordinary way.

Born in Kerala, a south Indian State, George Kuruvila Chavanikamannil  was headed to law school when the Lord saved him and called him for full-time ministry. He developed a special burden for the northern part of India, traditionally a very difficult place for the Gospel.

George's future wife, Leela came to know the Lord at a very young age. After completing her university education in Kerala, she started teaching in a school in Katmandu, Nepal. From there she reached Minneapolis, Minnesota in 1972. George joined her in 1973 and they were married in St. Paul, Minnesota. They moved to California in 1974. George enrolled in Fuller Theological Seminary. After graduating from Fuller he joined World Vision in 1977 and served till 1986.

All through these years God was developing a vision in the hearts of George and Leela -- a vision to reach their own mother country with the Gospel. So in 1986 George resigned his position with World Vision to pioneer the ministries of Good News for India.

Sharing his vision to build a training center for native Indians to go out to serve the Lord, God provided the means to build the Luther W. New Theological College in Uttar Pradesh, India. It opened its doors in 1989 and has continued to train Christian youths to serve the people of India. Please pray for George and Leela and their two sons. With God's help, Good News for India is committed to sharing the life giving Word of God to all who would listen.